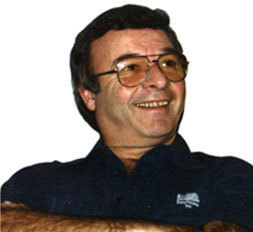 Known as the world’s first Professional Ice Technician, Doug Moore was the coolest man behind the scenes in hockey – hands down.

His journey into ice making history began in 1974 when Harold Ballard, owner of the Toronto Maple Leafs, promoted him to Chief Engineer, making him responsible for ice conditions at Maple Leaf Gardens.  The NHL had tripled to 18 teams by then, bringing a longer schedule and warm weather hockey. Ownership added a centre-hung scoreboard and increased seating for hockey to 17,000.  With an antiquated refrigeration plant and a concrete floor nearly 50 years old, Doug realized providing a high quality ice surface for the Leafs would require changes in how artificial ice is created and maintained.

The Gardens’ ice surface was now denser, harder and faster and able to withstand razor-sharp skate blades and the heat of glaring television lights. Accolades poured in and Doug’s reputation as an authority on ice making was the talk of the National Hockey League. His talents were recruited by skating icons like Toller Cranston and Elvis Stojko. He rocked the world of curling, sharing his formulas with the best ice makers in the country.

No one enjoyed a challenge more than Doug Moore. His expertise was front and center on CBC’s “Venture” show when he was contracted by the Florida Suncoast Dome in St. Petersburg to supervise an off-site game between the Pittsburgh Penguins and Los Angeles Kings. With minimal refrigeration capacity and outside temperatures exceeding 95°F, a portable ice mat was installed on the baseball field. Using 50,000 lbs of ice cubes, Doug pre-cooled the hot concrete slab and chilled the warm southern flood water for making ice. Promoted as “Fire on Ice”, this 1990 event featuring Gretzky vs. Lemieux attracted 26,000 fans – setting an NHL attendance record.

Innovators change things and Doug Moore was an innovator.  He dedicated his life and earned his livelihood educating and training rink managers. He was a pioneer and a visionary, transforming ice making into a craft and changing the future of the ice making industry.

Due to one man’s passion and drive to understand and improve artificial ice, every figure skater that glides on ice, curler who draws to the button and speed skater who has gone faster than ever before are unknowingly part of Doug Moore’s legacy.

The following are just some of the many testimonials in regards to Doug’s outstanding work in advancing ice making technology:

I have been struck by the tireless behind the scenes work your father contributed with passion and dedication to the game whether a neutral site game in Sacramento, a regular season game at Madison Square Garden, a Stanley Cup game in Montreal, or at the World Cup of Hockey in Ottawa, your father was there to lend his expertise.

In many places in North America they simply called him the “Ice Man”. For he was a genius at making pure water freeze into perfect ice, the ice used by hockey players, skaters and curlers.

Brian McFarlane
One of hockey’s best known and most respected historians, broadcaster of Hockey Night in Canada and a member of the Hockey Hall of Fame.

The Advanced Ice Making Technology course developed by Doug Moore, today serves as one of the three that leads to an NHL recognized Certified Ice Technician’s professional designation

Doug Moore spent more days without sleep, finding ways to improve all aspects of ice for everyone and in every area. There wasn’t a time, a day or night, that you couldn’t get Doug and have him help solve your problem.

Doug, thanks for the great ice over the years at Maple Leaf Gardens.

Mr. Moore’s greatest contribution to the lives he touched was getting the facility operators to think for themselves. He was our safety net and reference point when we had a problem. His expertise was outstanding in every aspect of ice usage, including hockey, curling and figure skating.

As a professional ice skater, we need ice that is fast, and also soft enough to control our edges and our landings.”…..”I first met Doug Moore and used Jet Ice back in the Calgary Olympics and I was excited. The ice was consistent every time.