In September of 2008, our Senior Research Chemist, Gil Adamson, passed away at the age of ninety-six. Gil was still working in his last days, albeit in a part-time capacity, as a trusted advisor and technical consultant to the company.

A bit about our dear friend…

In 1912 two important events happened that involved ice. First, a boat called the Titanic hit a rather large chunk of the stuff, and second, Gilbert Adamson was born, a man who would go on to develop methods of improving man-made ice. 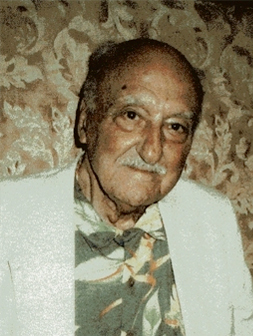 Born and raised in Ottawa, Gil graduated from Glebe Collegiate at the age of 16. Anxious to continue his studies but unable to afford university quite yet, young Gil took a job with the E.B. Eddy Pulp and Paper Company, first working in their laboratory and then posted to their water filtration plant. According to Gil, while this period served well to build up his knowledge of the fundamentals of water treatment it did little to build up his bank account. “I was spending all my dough on girls. And cars. And did I mention girls?” Finally, “in a fit of common sense” Gil requested a transfer to the company’s pulpwood operations in the remote forests of Northern Quebec where he knew there would be nothing to do with his money but save it. “The only females up there were moose, and by the time I arrived, the good-looking ones were already spoken for.” Eventually, Gil had put aside enough money to attend the University of Maine, a school he had chosen for its courses in pulp and paper technology. When he later returned to Ottawa, as a chemical engineer, Gil expected to go back to work with E.B. Eddy but instead ended up taking a job with the General Electric Company in their air-conditioning division.

When the war broke out, in 1939, Gil was transferred to General Electric’s Toronto office where his principal activity entailed selling alkyd resin to the paint industry with particular attention to the production of wartime naval paints. Three years later, in 1942, Gil married Gwendolyn Hyndman, another Ottawa native, and together they moved into the Toronto neighborhood of Leaside. In 1945, after the war was over, Gil left G.E. to accept a position with the Rohm and Haas Chemical Company. First posted to their research lab in Philadelphia, Gil soon returned to Toronto to help the company set up a new plant in the city’s east end. Here, Gil remained until his retirement from Rohm and Haas in 1977 at the age of sixty-five.

When one door closes another door opens…

As so often happens, and happily standing behind this second door, with a welcoming drink in hand, was a man named Doug Moore. Doug, then the chief engineer with Maple Leaf Gardens, was looking for someone to help him solve some issues with the Gardens’ ice. He had heard about a chemical engineer named Gil Adamson who apparently knew something about both water treatment and ice paint technology. Doug and Gil hit it off from the start. In Gil’s words, the two men “sang in the same key,” a statement that was true literally as well as figuratively as both men shared a passion for music. Doug, a talented singer and guitarist, was well-known throughout the NHL for his abilities to spark any party to life, and Gil, a conservatory-trained musician, would keep those sparks flying with his stride piano stylings in the tradition of Fats Waller and Art Tatum. 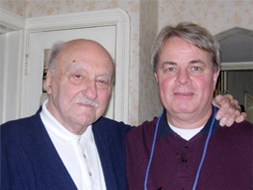 Doug and Gil truly shared a love of good times. Gil’s favorite saying was, “Nothin’ beats fun,” and while his preferred method of expressing this simple philosophy was through his quick wit, he occasionally resorted to more “practical” means. For instance, he once stuck a private realty ‘For Sale’ sign on a neighbor’s front lawn while that neighbor was away on vacation. To complicate matters further, Gil was careful to remove that sign before the neighbor got home. For days afterwards the neighbor had no idea why he was being plagued with phone calls from total strangers wanting to know if he had an eat-in kitchen and a finished basement. (In all fairness to Gil, this joke was in retaliation for that neighbor having dumped several hundred empty liquor bottles on Gil’s front lawn prior to a planned visit from the local church minister.) As Gil aged, his style of jokes softened, but his sharp wit never dulled. After his beloved wife, Gwennie, had died and Gil was living alone, a visitor to his two-story house once asked Gil why he had moved his bed from upstairs to downstairs. Gil answered, “The broads in this neighborhood are getting kind of old. I find that by the time they reach that top landing they aren’t worth a damn.”

Towards the end of his life, Gil’s house became a drop-in center for anyone in need of a sympathetic ear, a bit of sage advice, or simply a good laugh. Gil’s standard greeting to all who crossed his threshold was, “You’re just in time. The party’s just getting started.” And by the time you reached his kitchen table your drink would be poured and the cheese and crackers would be served. Gil will be missed by many, but most especially by his three children and two grandchildren.